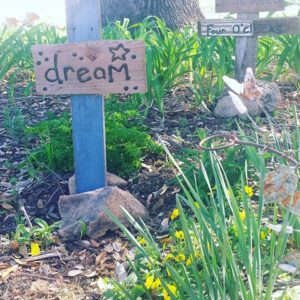 If I had a dollar for every time someone asked me what I was going to do with the half-built shed, I’d be rich. Honestly…..it is a leaning tower of a potting shed. A total eye-soar.

I found the ugly, half-built potting shed down the stteet. I paid a whopping $100 for it. I figured I couldn’t buy wood for that price, so it must be a good deal. All I had to do was move it two blocks, which seemed easy enough. My husband took one look at it, and laughed out loud. “You bought THAT thing????” I have to admit, my garden pride was a bit hurt.  I retorted back “Just wait until I fix it up with cool, old wood and windows!!!” He just rolled his eyes and laughed again. “I will bet you the $100 you can’t get that thing even moved, let alone fixed up.”  It was on!!!

First, I had three different ”Handy-Randy’ men come by and look at the shed. All three said the same thing. “That thing will fall apart if you try to move it.” Dang it. I hate when my husband is right!!

I went to plan B, which was ‘disassemble and reassemble’.  My friend, who has a great sense of humor, got about half way finished disssembling the thing, when the owner of the property told me HE could move it himself without any problem……Really?

So, a few weeks went by.

Then a few months.

Then some rain and then a drought.

All the while, I had to drive by the half-built, half disassembled, eye-soar of a potting shed and listen to my husband’s laughter. “Still there, eh?”

Then, just like magic, I drove by the studio and there it was…..the eye-soar of the neighborhood had actually been moved!!!  It was unbelieveable. A bunch of football playing studs literally carried it off the trailer. I could hardly believe it.

“You know, that potting shed is leaning.”

After all that work to move my ‘new’ potting shed, it is now leaning. Half-built and leaning.

Let’s all face it…..most people don’t see life through the eyes of a gardener.

A gardener sees growth and beauty in just anything ordinary.

A gardener looks beyond the obvious and sees the imagination.

In fact, a gardener can look at a seed and see an entire bouquet blooming in their mind.

Yes, my half-built, half disassembled, leaning potting shed has a few quirks, but I see a Pintrist She-Shed in the making. In spite of it all, I really love it. I love the vision and I love the process. I love how the potting shed will look in a year. Just like planting a garden. I took some old barn wood and went to work.