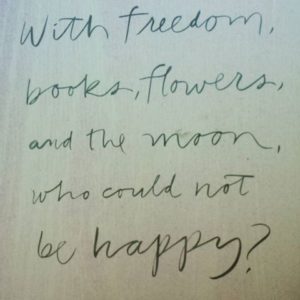 “It was the best of days”

Leave it to a child to verbalize the perfect description of yesterday’s dig.

My friend, Amy, came to help dig. She brought along her entourage of boys, and her beautiful wide-eyed young daughter. Our goal was simple…..wear everyone out (while digging up garden treasures for Amy and I).

Amy is the perfect Boy Mom. She and her husband foster-adopted four boys, who all stand at just about the same height. Each of her boys is unique, and yet they all share the same common denominator…..they LOVE bugs. They love grubs, worms, lizards, geckos and any other creepy crawly thing you can imagine. They collect them. They name name. They put them in pockets and in hidden places all over Amy’s house. Seriously, they looooooove bugs.

I had Devon helping me dig up my beloved Dwarf Crinums. He was like a chicken looking for worms. In fact, he WAS looking for worms. I’d dig, and he’d yank out the worms as if they were treasures from a long lost, ancient city of gold. Each time he would spot a worm, Devon would yell out “There’s a worm!!!!! I LOVE worms!” He had found an old jar and put the collection of worms inside. I’m sure Amy will find the worm jar in her China Cabinet, as she prepares for her Thanksgiving meal.

Meanwhile, Eli was fascinated with the Pigeonberry plant. He spent atleast  an hour collecting the little, red berries, while pondering how to plant each little seed. I finally went over and dug up an entire plant for him. You would’ve thought I was the coolest person on the entire planet. He looked up at me, with these beautiful, brown eyes. “My own plant?!” Yes, Eli. Your very own plant. I showed him where there were a few terracotta pots that had survived the flood. He went over, added some soil to the Pigeonberry, and proceeded to carry it around with him the rest of the morning…..daydreaming about what tree to plant it under.

The other two boys were running back and forth through the yard with Sophie, 6 years old. They were in a race to see how many rocks they could carry to the curb. (I’m leaving no stone in the garden unturned…..litterally. I’m moving everything.) The boys tired out after carrying about 20  rocks. I think Sophie made it to 119 rocks. She yelled out each rock number she carried. “Mom, what number is after 111?” Amy never tired. “Sophie, what is after one?” Sophie answers. “That’s right. So what is after 111?” Sophie was in it for the winning prize…..one whole dollar. Amy has her kids trained very well.  I told Amy that Sophie would be the perfect violinist. Driven, metally focused and receiving unbalanced pay for the workload she put in. Ha!

While all the action was going on, between the running, squealing, counting and collecting, Amy was able to dig up some Daylilies, Oxalis, Iris, Russian Sage, Paperwhites, Mammoth Coneflowers Native Salvia and some Star of Bethlehem. Her kids went home with treasures found after the flood, and Amy had garden treasres to create a new garden.

As for me, I got the pleasure of hanging out with a friend who is beginning to love bulbs as much as I do. I might even have some digging competition!!! I just stood back, and watched the whole morning unfold, as I dug up my small white Crinum. Then I looked over at Sophie, and she has caught a Monarch Butterfly. The last round of migrators. This particular butterfly was slow to move, so she took it into her car and warmed it up. It worked like a charm. After a little warmth, Sophie let the butterfly go, and off it flew.

Yes, Sophie. I think you are right. Gardening with friends and children is a good way to spend a day.