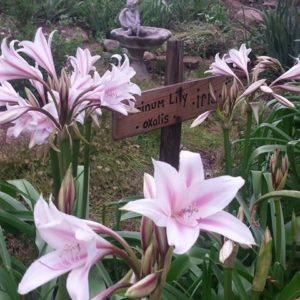 If collecting Crinum was an addiction, I would be the Crinum Addict’s poster child. Luckily, my lifestyle doesn’t really bother anyone, so I suppose there are worse things in life to be addicted to, like Begonias.

The first time I saw a Crinum, I was completely smitten. I still remember it as if it was yesterday. We were riding horses by the abandoned property that was part of a large aluminum plant. I saw the dilapidated, old hunting cabin and immidiately spyed the enormous amount of flowering lilies. I couldn’t believe my eyes. Hundreds upon hundreds of lilies, tucked away in the middle of nowhere. I asked my Mother-in-law about the property, and was given the ol “we aren’t bailing you out of jail” speech again.

I rode my horse home, got some bags and a sharp shooter shovel, and drove back. Like any good plant addict, there is not a lot to get in the way of a beautiful Lily…….

Rain? No Trespassing signs? No problem!

I’m not afraid to admit of hopping a few fences and signs for the love of a bulb. That’s just what Crinum addicts do. The mere thought of these lovely lilies getting plowed down, as modern progress comes through, is just too much for me to bear……So I hopped the fence and ripped my favorite pair of jeans.

The land was overgrown and covered in poison ivy. I remembered my Mother’s voice about always wearing gloves. I was borderline remorseful that I didn’t heed her advice. Both sides of the old cabin were filled with old Crinum. These neglected Crinum probably had been growing and multiplying like feral cats for over 75 years…..maybe longer. The area on each side was probably 10-15 feet long and 8 feet deep of root bound Crinum, along with countless babies growing everywhere. I was in Crinum heaven.

I had never dug up a Crinum before, so I wasn’t expecting the strength it took to retrieve one bulb. I was such a rookie!! I left with just a few bulbs, my tail between my legs and the Crinum addiction fueled deep in my garden soul.

I’ve been back to the property many times.  I have also enjoyed talking to other local gardeners who had dug at the abandoned “Crinum Cabin”. It’s nice to hear the stories of where these old Crinum are now residing. It definately will take a village to rescue the rest of those old Crinum.

The Crinum Cabin liles are known as Milk and Wine Crinum. They are truly stunning. Crinum bloom from late Spring throughout Summer, and always bloom after a nice summer rainfall. These bulbs are drought hardy and everlasting. Crinum are a staple for Southern Garderns. These heirloom flower bulbs are available, by donation through this website. Check out the store, and simply email….heirloombulbgirl@gmail.com