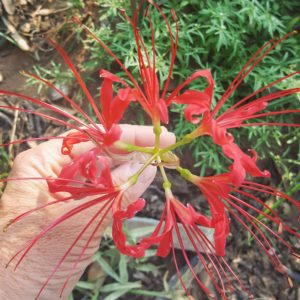 The beautiful bloom of the Spider Lily never ceases to amaze me. I always am in complete awe of the intricate detail of the flower. The first Spider Lily has appeared in the garden. I’m completely elated!

The first time I ever saw a Spider Lily was at our home in Dallas. I was fairly new to Texas, and a first-time homeowner of a charming little 1950’s cottage in an older part of the city. I had taken it upon myself to whack down every Holly bush in front of the house. Lo and behold, under a thorny Holly bush, I saw my first Spider Lily. It was not fully opened, but I could tell it was something very special. After the bloom, I dug the bulb up and moved it to a more desirable spot. The following year, I had two blooms. I guess my new found Lily was happy.

Since that first Spider Lily encounter, I have searched high and lo for old homesteads that would like to share their bounty. I have enjoyed meeting old gardeners, and gear the stories of their beloved gardens. I have enjoyed sharing heirloom bulbs with fellow gardeners and making new friends along the way.

The Spider Lily is a hardy, southern bulb that blooms after the first rainfall of late summer or early Fall. Spider Lilies are a sign that the heat of summer is finally over…..nature’s little gift to gardeners, as if to say “Well done, good and faithful servants.”

To plant a Spider Lily, simply choose a spot where the Lily can be left alone, and enjoy years of garden happiness. The Spider Lily needs very little to flourish….just avoid standing water during the dormant season. Bulbs that are “sleeping” don’t like wet feet.

Happy Gardening, my friends! Spider Lilies will be available once again next April, after growing season.  You are always welcome to make an appointment to see the flowers at the studio, and I can share live bulbs with you. Cheers!